The S S Palo Alto, also known as the “Cement Ship” is a Monterey Bay oddity from my childhood, up there with Santa’s Village, Lost World, and the Mystery Spot.

The S S Palo Alto was a concrete ship built in Oakland at the end of World War I and launched in 1919, too late to take part in the war.

The ship was mothballed until it was purchased by the Seacliff Amusement Company and towed to Monterey Bay in 1930. It was sunk in shallow water, at Seacliff Beach, her bow pointing West towards the Pacific.

It was opened as an amusement ship with dining, a dance hall, and swimming pool and a pier was built out to the ship. The timing could not have been worse because it’s opening coincided with the start of the Great Depression. The ship cracked in half during a storm in 1932 and the ship was closed to access. It was eventually sold to the state for one dollar.

Over the years the ship has been torn apart. Recently, powerful winter storms including one in February 2016 pushed the ship onto it’s starboard side and then on January 21, 2017 the stern was torn off and now rests leaning on it’s port side.

A September 14, 2012 sketch of the S S Palo Alto in slightly better times. This sketch is of the ship’s starboard side and the gash from the 1932 storm is clearly visible. The bow has fallen away but the stern in intact.

Thousands of sooty shearwaters (Ardenna grisea) pass south off the bow of the wrecked Palo Alto.

The health clinic at 1450 Noriega Street is a few blocks from where I live in San Francisco’s Sunset District. It’s an unassuming building at the corner of Noriega and 22nd Avenue with a Bank of America ATM on the corner and a bucolic mural painted on one side. When you pass by the building, you would never know it was the location of one of the most notorious crimes of the 1970’s.

In 1974, 1450 Noriega was the Sunset Branch of the Hibernia Bank. And it was here, at 9:40 AM, that this branch was robbed. Now a bank robbery is not a notorious crime in itself but one of the gun-wielding robbers made this such a notable crime. The story really started  across the Bay on February 4, 1974 on Benvenue Avenue in Berkeley.

An Apartment on Benzene Avenue was the setting of the kidnapping of Patricia Hearst, granddaughter of newspaper publisher William Randolph Hearst. She was then a 19 year old student at the University of California when she was kidnapped by The United Federated Forces of the Symbionese Liberation Army (SLA). What happened from the moment she was kidnapped and the time she walked into the Hibernia Bank, 71 days later,  with a sawed-off M1 carbine rifle, remains shrouded in speculation and mystery. Was Patty Hearst brainwashed or did she willingly because a member of the SLA?

Before her star turn on the security cameras of the Hibernia Bank, she said in a communique that was sent to local radio stations :

I have been given the choice of, one, being released in a safe area, or, two, joining the forces of the Symbionese Liberation Army and fighting for my freedom and the freedom of all oppressed people. I have chosen to stay and fight.

We do know that she changed her name to “Tania” and when she was eventually arrested, over a year later, she listed her occupation as “urban guerrilla”. 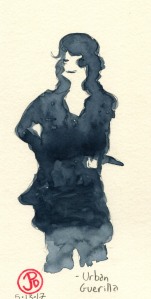 A painting from one of the most iconic images of the 1970’s: Patty Hearst, Tania, wielding a gun at the Hibernia Bank. Painted from a still from the security camera footage from April 15, 1974.

About the Hibernia Bank robbery Hearst said in a communiqué sent to a local radio stations:

Greetings to the people. This is Tania. Our action of April 15  forced the corporate state to help finance the revolution. As for been brainwashed, the idea is ridiculous to the point of being beyond belief. I am a soldier in the People’s Army.

I usually see the health clinic as the number 7-Haight/Noriega inbound bus makes a left turn onto 22nd Avenue. I imagine most passengers never realize what happened here, over 40 years ago. Indeed the events surrounding the Hearst kidnapping and her participation with the SLA proves the point that reality really is stranger than fiction.

“I’m surrounded by storm-petrels!” I said as I watched another fork-tailed  wave swallow pass underneath me.

I had been reading about the continuing fork-tailed storm-petrels that were being seen at the Pacifica Municipal Pier and figured I’d make a jaunt out to the coast after work to see these pelagic delights from another pier in another country: San Mateo.

So while I waited for Dickcissel to head south from Marinland, I pulled out my camp chair, my sketch book, and my pen case and sat on the beach and sketched the pier.

It could be a scene from a Film Noir but no, it’s just Pacifica Pier.

From my vantage point, the “L” shaped concrete pier is not much to look at. The “Rev. Herschell Harkins Memorial Pacifica Pier”, as it is officially known,  was built in 1973 as part of the city’s sewage system where a pipe pumped sewage (treated I hope) out into the Pacific Ocean. It now primarily is used as a fishing pier but today it was used by birders as a quasi-pelagic platform that juts out a a quarter mile into the Pacific. This pier is much shorter and certainly less interesting than the Santa Cruz but it provided outstanding looks at the storm-petrels.

A storm-petrel flying below me on the Pacifica Municipal Pier.

Instead of seeing three FTSPs from a great distance, I was now surrounded by about 20. They were on all sides of the pier and frequently flew underneath the pier giving unique views that would be impossible on a pelagic boat trip. I figured that this experience may come once in a lifetime and felt lucky to be in the right place at the right time.

Field sketch from the Pacifica Pier. Just sketching these storm-petrels helps me understand and see them more fully.

This lifer was a parking lot bird in a manner of speaking. I looked at the text from Dickcissel: “fork tailed storm petrel san lorenzo river mouth. you going?”.

I really needed a pair of black pants but they could wait for a possible lifer so I left the Capitola Mall parking lot and headed to the San Lorenzo River overlook, which was about 15 minutes away.

At 9:52 AM a fork-tailed storm-petrel was seen again, two were first first reported from the rivermouth at 8:23 AM, one was being stooped on by the local peregrine. It was now 10:15 AM and I hoped the pelagic petrels would stay close enough to shore to be seen.

I parked, grabbed my car binos and headed out to the overlook. The first thing I saw was two birders, which was a very good sign. I walked out to the point and scanned the waters between the buoy and the Municipal Wharf, looking for a grayish low-flying petrel. One birder had it and I soon had the sea-swallow in my binos, tracking it as it flew to the right. The bird passed in front of the wharf and one birder suggested heading off to the wharf to get closer looks.

I was off to lunch to watch a Real Madrid “B” team slaughter already relegated Granada 0-4. It reminded me of the time I was in Bilbao last Spring, on a Sunday afternoon after the home team, Athletic Bilbao had drawn 1-1 with Granada. I was walking up to the Federico Moyúa Plaza, the town’s center, as the Granada team bus circled the plaza, quietly making it’s way out of town and now the Spanish minnows were quietly making it’s way out of the Spanish Primera Division.

A shop front in Bilbao sporting the crest of the local all Basque team. Futbol is a religion in this northern part of Spain. But I digress. . .

In the afternoon I decided to head out to the wharf, which was a popular destination in my childhood. I have many memories of eating burgers and fries with my dad and brother and then heading to the end of the wharf to watch the snoozing California sea lions. This area and the Santa Cruz Beach and Boardwalk is the tourist side of Santa Cruz and I now rarely visit this part of town, but close looks at a rare Monterey Bay petrel drew me to the very end of the west coast’s longest pier at 2, 745 feet. That’s 2,745 feet jutting out into the Monterey Bay was almost like being on a pelagic boat trip but without the rocking and rolling. Dramamine not needed.

The sealions of my youth. Under the wharf of the West Coast’s longest pier.

When I walked to the end of the pier, there were two good omens.the first was that there with about eight birders peering off to the waters (always a good sign). And the second was a honey bee that alighted on my right hand (can’t ask for a better blessing). And I just kept birding with my pollinator guest. 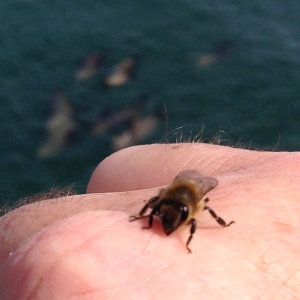 Show no fear, don’t get stung. It’s a lesson I  teach all my students: don’t be afraid of nature, nature has more reasons to fear us.

It didn’t take too long, with so many scopes and binos  trained on the waters to find a fork-tailed storm-petrel. One was sighted as I walked up, in fact there were three of them foraging off the pier. One came so close that I lowered my glasses and watched it with the naked eye. Amazing for a pelagic species and not being on an ocean going vessel!

We were frequently asked by the tourists if we where looking for whales. The standard response was, “No, just a small ocean bird. ” That answer usually struck them dumb and they hurriedly walk off as if we had the Pneumontic Plague.

As a nice bonus I spotted a humpback’s blow on the horizon, followed by its flukes as it dove. So I  now could say we where looking at whales. But they didn’t ask and I didn’t answer.

There’s nothing like discovering amazing birds in your own backyard and my “backyard” is Golden Gate Park. And seeing four owls, in the daylight, is even better.

Traditionally great horned owls have nested in the crook of a pine across the street from the Bison Paddock. This nesting tree, and the owlets in, it have featured in a few sketches in the past.

So on a very warm May afternoon, I headed out to the park with my scope, paints, and sketch book. I focused my scope on two owlets in the crook of the pine. Another owlet was branching out and perched on a limb above the nest.

The owls seemed to be nesting a little late in this year, perhaps because of our record Northern Californian rainfall had something to do with the timing. Great horned owls don’t build their own nests, instead they might reuse hawk or crow nests or use caves or crooks in trees as was the case with the paddock owls.

A pre-painting sketch of the great horned owlets.

Which sketching, I was entertained by a black phoebe that would fly in to a puddle on the jogging path, collect some mud in it’s beak and fly off towards the paddock to continue work on it’s mud-cupped nest. 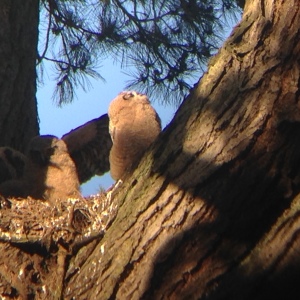 A Golden Gate Park owlet thinking about branching out. Note the whitewash on the rim of the nest. It’s a sure sign of owl activity.