Having an amazing experience in nature while observing an animal can stay with you long after the encounter.

Coming across a mountain lion on the Coast Trail in Pt. Reyes is an experience that readily comes to mind. Or watching thousands of snow geese erupt into the air in the Central Valley is another. Swimming with a 36 foot whale shark (and her 16 foot baby) off the coast of Utila is yet another.

I can now add to those encounters the one I had with the Earth’s largest falcon. It was not just that a Gyrfalcon is such an amazing raptor, but the quality and length of the experience. I had read tales of birders getting far off scope views of a brown smudge on a power pole of previous wayward gyrs. And this was far from my encounter.

Here are some of the reasons why my encounter with a gyrfalcon will last for a long time to come.

This is a bird that will make most California birders leave work early, jump in their cars and drive all night, just to get a far off glimpse of this falcon.

Luckily for us, this Gyr has been hanging around the Arcata Bottoms for over a month and we hoped she would stick around just one more day until we could focus our bins on her magnificence.

But with a storm rolling in, there was no telling if the bird would be heading off in any direction or if steady rain would hamper the visibility. Draining colors out of distant birds to become brown specks, morphing into a vertical branch on the power pole.

Gyrfalcons are listed as “Sensitive” on eBird and their locations are not available to the public. This makes finding their exact location a little challenging. The reasons for such secrecy is the place of prestige this sought after falconry bird attains in the world market. These hunting falcons are highly prized in the Middle East and because of the rarity of the bird, it was reserved for royalty. Wild birds are therefore, targets for animal smugglers as these birds can fetch $275,000 on the market.

A peregrine falcon first called our attention to the presence of the Arctic invader as a PEFA stooped on the female gyr perched on a pole on the south side of Jackson Ranch Road. And for the next two and a half hours we were in the 360 degree theatre of the Gyrfalcon. 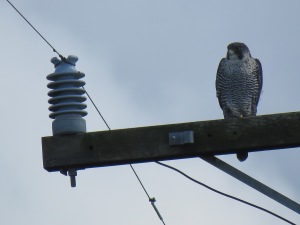 Watching a perched gyr is interesting enough but we got so much more as the bird took advantage of the window between storms to hunt. Flying low across the fields and making repeated passes over the slough, chasing up American coots and grabbing them along the way but then releasing them as if she was just practicing.

At one point the gyr walked around the ground and appearing to be hunting a small mammal, which she ate on the ground. This falcon was showing behavior that was very different from the arial specialist, the peregrine, or the stilling kestrel. This falcon was so much more!

And she rightly takes her place with the mountain lion, snow geese, and whale shark as very memorable animal sightings in the natural world.

With rain on the wind, I set out with Dickcissel on another Saturday morning heading north. Our destination was four and a half hours away to a piece of open expanse known as the Arcata Bottoms. This is a winter raptor wonderland with white-tailed kites, red-tailed, red-shouldered hawks, harriers, kestrels, merlins, prairie falcons and peregrines and short-eared owls talking over the crepuscular and night shifts.

The weather forecast was uncertain with rain forecast in Arcata and we left the Bay Area under a sheet of rain. We both didn’t say it out loud but this could be a waste of a long road trip if the weather reduced our visibility to nil and out target bird moved on in front, and on into oblivion as far as we where concerned, of an approaching storm front.

We knew the bird had been seen the day before and we hoped the Arctic breeder would not be put off by a bit of winter rain. While our quarry is suited for cold temps with body feathers, down, and feathered legs, we packed rain coats and pants, hats, mud boots, and an umbrella. We had been watching the rain forecast all week and as the weekend loomed, the prediction was that there would be a small window of clearing in the early afternoon and we wanted to take advantage of being in the right place at the right time.

As we neared Arcata, the rain lessened and we began to see patches of blue. We pulled into Eureka (we hoped to later say, “Eureka! We found it!”) and then headed northeast to the area of open farmland, north of Arcata Bay, known as the Arcata Bottoms.

Pulling off the highway we were greeting by a narrow, cracked road with a line of loose chickens that blocked our passage. We were really out in the open country now which contrasted with the cities we had left had left behind earlier in the morning.

It was not long before we saw our first raptor flying low off to our left. It flew up to a distant post. We got the bird in the scope hoping that it would be our target bird but no, it was a juvenile red-tail. We packed the scope into the trunk and headed to Jackson Ranch Road, stopping between the yellow house and the blue-roofed house. This is where our target bird had been seen over the last month.

As we stepped out of the car and geared up, it started to rain. This was not a great sign. Every power pole, post, and open ground was closely inspected with nothing save a raven or a red-tail, but no falcons. We headed back along the road to get a better view of the line of power poles that ran out into the green field. A source had told us that the falcon favored these poles as her favorite perch.

The rain began to abate.

Behind us there was a explosion of activity as three raptors filled the air. The strident call of a peregrine filled the previous quiet air. We quickly ran back from where we had come, which is not all that easy when you are shouldering a scope!

“There it is!”, Dickcissel exclaimed and I got the bird in my bins. It was a perched and did not resemble any other bird I had seen, Falco rusticolus, the largest falcon in the world, the Gyrfalcon! The peregrine was stooping on the gyrfalcon, proclaiming it existence in the world.

The first photo I took of the female gyrfalcon! What a beast!

This is an arctic breeder that is very rare in California. Most gyrs that head south during the winter are juvenile females and we where looking at one of three morphs. This female was a gray morph. The bird rocketed low across the road and landed on her favorite perch: the third power pole from Jackson Ranch Road.

“Have you see the bald eagle?”, a voice asked from the house behind us. It belonged to a woman who lived in the blue-roofed house and she pointed down the road to a bird perched on a power pole. I got the bird in my bins and it was the resident peregrine falcon.

Field sketch of the female gyr on her favorite perch.

For the next two and a half hours we watched this amazing falcon in the 360 degree theatre of the wide-open-space called the Arcata Bottoms.

Some lifers are seen for a short time and you may not get quality looks with the bird being obscured by foliage, seen from a great distance, or the target bird being seen in poor light. The gyr was a completely different story. This was not only an extremely rare bird for California, but we were getting incredible views of the gyr, close up and in great light. This is a falcon of wide open spaces and we had prolonged looks at the perched falcon. Unlike other raptors, the gyrfalcon was extremely active as she flew low over the fields, often being pursued by ravens. She turned and started to chase the corvid, easily closing the distance with her powerful wingbeats. The gyr would return to her favorite power pole perch to preen before raising her wings before launching another sortie, to the consternation of any avian life in the area.

One odd observation was a black Labrador that was running through the fields and chasing American coots up from the slough. The gyr joined in on the attack, flying down a coot with ease. She grabbed a coot and would then release it dropping like a stone back into the slough. I wondered if this was some primeval hunting relationship between the gyrfalcon and Arctic wolves. Such a beneficial relation exists between wolves and ravens in the Arctic north. The gyr made two more passes as she flew above the dog, grabbing a coot along the way and then letting it go. Prey practice I assume