This year, in 2015, the University of California at Santa Cruz (UCSC) celebrates it’s 50th birthday.

I graduated from The City on the Hill in 1995, not with a degree in Art but in Literature with a pathway of Pre and Early Modern Studies in Literature. What does this degree really mean? And “what is pre and early modern studies?” you might ask. Well it’s just the study of dead white, and sometimes blind, poets: Milton, Donne, Marlowe, and of course Shakespeare.

The first time I encountered the Bard was an old leather bound copy of Shakespeare’s Complete Works that was kept in a cabinet in the front room of my childhood home (it was a wedding gift for my parents). I would occasionally thumb through the onion-skin pages of tiny words, arranged in two narrow columns. I never read the words but I somehow thought that this must be some sort of sacred text that came out from time to time during some of my parents many cocktail parties (this was the 70’s after all), not that anyone would open the book but it sat on the coffee table, looking cryptic and important. To one of the valley’s engineers, it might have even appeared to be an over-sized coaster.

I later encountered Shakespeare in high school, reading Romeo and Juliet and watching a grainy VHS copy of the  iconic Zeffiirelli production. I was hooked! From there I made a pilgrimage to Ashland and it’s Shakespeare Festival.

The beautiful campus has provided many sketching opportunities and the sketch above was completed on one recent Sunday, June morning, while seated on stage, looking out to the Sinsheimer-Stanley Festival Glen. My only audience was a feeding doe and her spotted fawn.

A sketch done from another hike on the UCSC campus and Porter College, formerly College Five. My hiking companion had attended College Five in the early 1970’s. To the left, and out of frame was the the Porter Darkroom Guild, where I spend many hours learning how to print black and white prints. 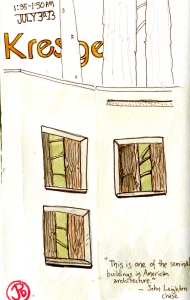 A detail from one of the most interesting colleges from an architectural standpoint, Kresge College. When I was there, it was rumored that a college course in Japan was taught, just about the architectural innovations of this college.