Monfragüe National Park is the crown jewel of the Extremadura region. This is one of Spain’s 15 National Parks and was established in 2007. The 17.852 hectare park is recognized by UNESCO as a Bioshere region. But of course we were here for the raptors. Monfragüe hosts 15 regular breeding species, including the world’s largest breeding concentration of Eurasian black vultures. The real highlight for a birder in Monfragüe is to see the blue Iberian skies covered in raptors: vultures, kites, hawks, and eagles and we were not let down.

This is the land of the old world vultures, the ones with long, snake-like necks and a billowy scarf of feathers. These were the vultures of National Geographic, the Jungle Book, and Ferdinand the Bull. 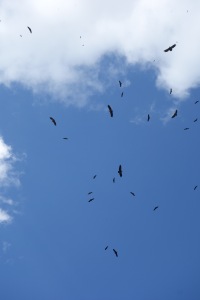 The skies full of vultures (three species), kites (two species), and eagles (one species) at Monfragüe. In California we would describe this scene as “raptorlicious”.

When Pau and I set out from Las Canteras early on a misty morning, our destination was Monfragüe and our prize was the bird that the two English brother twitchers would inevitable ask us about as they indeed greeted us in the evening with, “Did you get Spanish imperial eagle?” This eagle is the the prize bird for any birder visiting Monfragüe. It is a very rare bird, in the 1960’s only 30 pairs existed. Powerlines, poisoning and habitat destruction where the causes of the eagle’s decline. Through conservation efforts the eagle’s population has slowly increased. In 2011, there were 318 pairs in Spain. On the drive to the National Park, I told Pau that I wanted to find the imperial eagle by myself. I picked through the many huge kettles of raptors looking for the eagle with snowy white leading shoulders. No luck. No yet anyway.

We came to a stretch of road that was across the river from steep cliffs that rose above the water. The road was lined with birders and their scopes. Their attention was fixes on the cliffs and the skies above. Pau pulled over and I reminded him, “Leave the imperial to me.”

I stepped out of the car and looked up. Above me was a large raptor rising on the thermals of the warm road. I raised my binos to my eyes. It turned to the left, slightly dipping it’s wing. A dusting of “snow” on it’s shoulders. I love when life birds, especially rare ones, are this easy to find! Spanish imperial eagle.

Pau later showed me the female on a nest. This eagle and the precious eggs she was incubating was a good sign that the Spain Imperial eagle would continue to thrive in Extremadura.

“Will Break for Dung Beetles”, Monfragüe, it’s not just about the raptors, it pays of to look down.

My guide in Extremadura was Pau Lucio. I would highly recommend him if you plan to bird this amazing part of Spain. His guiding company is called Birdwatching Spain and more info can be found at their website: http://birdwatchingspain.net