I headed out of Stumptown early on Friday morning heading east along the southern side of the mighty Columbia River. I was hoping to avoid the many summer visitors that congregate in this  river valley. In other words, I was hoping to sketch in peace.

At this point the river is a mile across, making most rivers in California appear to be creeks by contrast. North across the river was the state of Washington. This is a major waterway in the same way the the San Francisco Bay and the Great Lakes are.

Sketch of the very popular Multnomah Falls. For this sketch I filled in the negative spaces with by dark sepia brush pen.

The gorge contains many waterfalls but the most iconic and by proxy, the most visited is Multnomah Falls. The falls fall 620 feet and is broken up into two sections with an arched concrete footbridge that bisects the two. I arrive early enough to get a parking space and avoid the remote shuttle but there were plenty of other tourists was who had the same idea. I did two sketches (resisting the urge to sketch some of the interesting humans that where getting sore necks looking  up at the falls) and then headed eastward up the gorge. 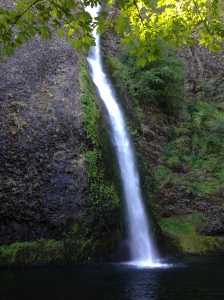 After a short stop at Horsetail Falls, I headed to the Bonneville Fish Hatchery. A teacher friend who hails from the Pacific Northwest, told me that I had to stop at this hatchery to see a massive fish. His name is Herman the Sturgeon and he is a ten foot white sturgeon who is 70 years old.

White sturgeons are the largest freshwater fish in North America and Herman was just plain huge. I sketched him, attracting the interest of tourists, and I later added lettering with a stencil.

I returned to my car, my next destination was an old lodge on the side of Mt. Hood! It was time to sketch at altitude!