On Black Friday I headed west onto the Pacific Plate. I was seeing how far away from a Marin shopping mall I could get without leaving Marin County. I figured the Outer Point at Point Reyes National Seashore would be the place.

On my way out to the point, just after crossing from the North American Plate to the Pacific Plate, I stopped on the western shore of Tomales Bay at one of the “larger” towns in Point Reyes: Inverness. I pulled into the parking lot behind the general store. My subject was one of the “tourist attractions” of Inverness, the boat known as the SS Point Reyes. For over 50 years this fishing boat has been beached on a sandbar and has been attracting tourists, photographers, and artists ever since.

I continued on towards the lighthouse and Chimney Rock. I passed some of the historic cattle ranches along Sir Frances Drake Boulevard. Whenever I am in the area I always stop in at Historic Ranch B, also know as Mendoza Ranch. I walked up to the cypresses to see the local great horned owls. I easily found the pair and I sketched one of the roosting owls.

The Outer Point is a world famous birding location known for its rare fall migrants. 410 different species of birds have been found here. Most of the migrants had already passed through but highlights included: a pair of peregrines at the lighthouse, a rock wren near the lighthouse parking lot, a Say’s phoebe on the way out to Chimney Rock, and a barn owl that was flying well past it’s bedtime at Drakes Beach.

I went as far west as physically possible in Point Reyes while still remaining dry: the Point Reyes Lighthouse. I sketched the lighthouse while watching a pair of peregrines that where perched on the cliffs above the common murre colony. One lifted off and spiraled upwards and then headed east towards Chimney Rock. Like the wanderer, I too headed to Chimney Rock. 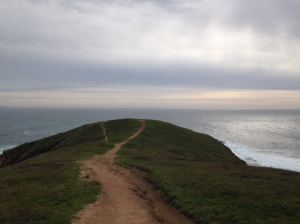 Looking out towards Chimney Rock, Drakes Bay, and the Pacific.