Birding takes patience, sometimes lots of patience. So here I was on the banks of the Rio Grande, looking across the river at our southern neighbor, Mexico. I had arrived at Salineño at sun up, the best time to see my target birds: red-billed pigeon, ringed kingfisher, and muscovy duck.

When I reached the river at the very primitive boat lunch, I saw an osprey on the Mexican side of the river, perched on a snag. I set up my scope, planning to get a close look at this “fish hawk”. While trying to locate the osprey through the scope I panned along the Mexican riverside looking for the base of the snag. There it was and I angled the scope up waiting for the osprey to appear in my field of view. But the bird did not appear at the top of the snag. I had gotten the wrong snag, instead of an osprey, peering intensely into the waters of the Rio Grande, I got a surprise, a true South Texas speciality: the red-billed pigeon. I had gotten the wrong snag, but maybe I had the right one all along. 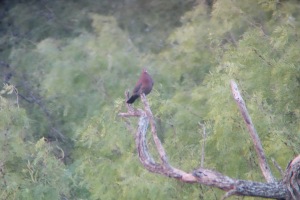 Three birders arrived at the shoreline. I informed them that I had a red-billed in the scope. One birder ran over to look through the scope to see his lifer. Birding is always about sharing the feathery wealth, just to confirm that what you are seeing is the real McCoy. The group of two was being lead by a guide and she told me that if I wanted ringed kingfisher, I would have to wait a long time because the females were in their nesting burrows at this time of year so only a single male kingfisher would be flying up or downstream. The pigeon flew upstream and the trio of birders also headed upstream, looking and listening for white-collared seedeater ( I would pick up this sought after lifer later).

I though I might have a long wait for the largest kingfisher in the Americas to appear so I unpacked my sketchbook, sat down on the banks, and started drawing the view looking upstream to the river that divided two nations. This sketch is a chronicle of a landscape and my experience in the landscape. Birding the border, watching a “Mexican” cow on the Mexico side, sounds very much like an American cow.

After about a 30 minute sketch, I set down my sketchbook and scanned the river for birds. Blue-winged teal, snowy egrets, a lone black skimmer, a soaring crested caracara (the bird represented on the Mexican flag), a pair of caspian terns, a low flying kingfisher. . . a kingfisher!!

The large, distinctive kingfisher flew upstream and perched on a low snag directly across from the boat launch! I got my scope on the beautiful male ringed kingfisher and was able to get a quick field sketch of the bird and took a few digiscope photos. The male gave me and the two sister Wisconson birders, who had just arrived,  a great look at a lifer! 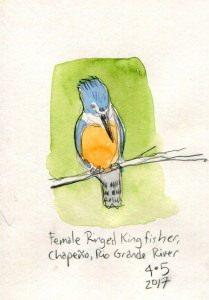 Quick ringed kingfisher (Megaceryle torquata) sketch from the banks on the Rio Grande. 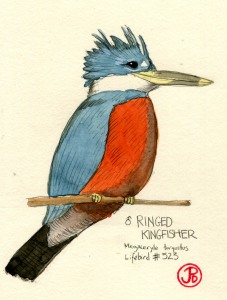