My final destination on the Oregon Trail, before I headed to Grand Teton and Yellowstone National Parks, was Independence Rock. This was another destination, like Chimney Rock, that I was really looked forward to seeing and sketching. It would be the end of the road for me on a journey that started at California Hill in Western Nebraska and passed through some of the most scenic and emblematic scenes on the Oregon and California Trail.

My base camp was Casper, Wyoming and Independence Rock was about an hour’s drive to the  southwest. I was really heading into sparsely populated country (Wyoming is the least populated state in the Union), where the highway, the North Platte River, the trees, and the snow-capped mountains were my traveling companions.

Independence Rock appeared as a large, low chunk of granite,  just left of the highway. And like the pioneers that passed this way, this was also a rest stop for modern travelers.

I walked around the rock until I found a place to climb up on the rock to find the real gold on this piece of granite. The reason that Independence Rock is such an important site for the present day is that it is known as Register of the Desert because emigrants that paused to rest here, ascended the rock, just like I was doing, and took the time to carve their names and date of passage into the granite. And what is most amazing, like the wagon ruts at California Hill, the signatures are still legible today! 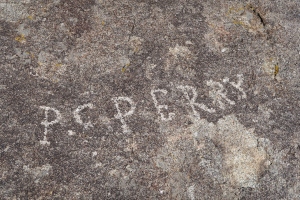 On my way to the summit I came across this name. Could this be a relative of mine?

A signature writing into the history books of Independence Rock: “I. J. Hughes July 4 1850”.

One of the thousands of names carved into the granite of Independence Rock. This one reads, “Milo J. Ayer, age 29. 1849.” It is amazing that this signature of a 49er still exists! 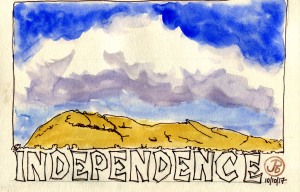 My last field sketch from the Oregon Trail before I headed back to Casper and then across the state of Wyoming to Grand Teton and Yellowstone National Parks.