The Lamar Valley has been called America’s Serigetti because of the large number of animals that wander through the Valley. Bison, grizzly and black bear, bald eagle, and the recently reintroduced gray wolf.

The most productive times are dawn and dusk for wildlife viewing. But because of icy road conditions and a visit to Roosevelt Arch, I rolled into Lamar Valley just after noon. What impressed my about Yellowstone is the amazing animals I had seen in the park for the first time: Bison, grizzly bear, and trumpeter swan. Today the bison where covering the near distant hills and gazing near the Lamar River. On the near shore was an adult bald eagle accompanied by two ravens. It was a beautiful panorama but my target animal, the gray wolf, was evading my view. I would try again the following day, which would be my last day in Yellowstone. And the setting of my search would be another wolf hotspot: Hayden Valley.

A sketch of Lamar Valley while waiting for a bear or wolf to appear. They didn’t but I have a sketch to prove I was there.

I had to take a round about route to Hayden Valley because of road closures so I entered the Valley a little over two hours after I left West Yellowstone. Aside from far off bison and a pair of feeding trumpeter swans, there was no sign of Canis lupus.

Our largest swan, the trumpeter swan (Cygnus buccinator). A lifer for me.

At one turnout a couple pulled up, unloaded a scope and scanned the far off hills. This was good sign, they were wolf watchers. The woman told me that they had just seen four mollies feeding on an elk carcass. I asking for clarification, what did she see? Mollie was the name of one of the wolf packs whose territory was in the northern part of Yellowstone Lake. The man described the location in great detail. He told me to look for the lake to the left and on the far shore was something that looked like a “brown suitcase”, this was the elk carcass and the wolf pack had wandered off into the trees. I reversed course and headed south, in search of the most sought after mammal in our Nation’s first National Park.

I arrived at the location 25 minutes later. It was just as the wolf watcher described it. As I pulled up, I saw a dark mammal on the far shore. The prerequisite roadside cars were in attendance. I parked on the roadside and crossed over. I didn’t need my binoculars to tell me what I was looking at: Canis lupus. 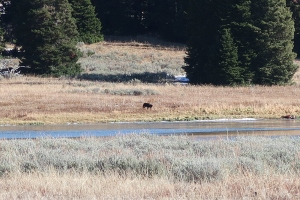 My first signing of Canis lupus, a black Mollie near what had become the brown and red suitcase on the shore of the small lake just north of Yellowstone Lake.

A field sketch of the black wolf from the Mollie pack. 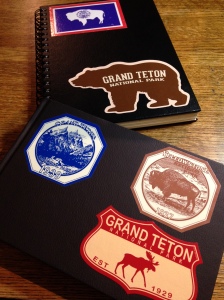 The two journals I brought with me on the Oregon Trail and to Grand Teton and Yellowstone National Parks. A Strathmore bound watercolor book (in front) and a Sillman & Birn spiral bound Delta Series. The journals are covered with stickers representing the animals I saw and sketched on my journey: bison, grizzly bear, and moose.