When I first arrived at the Canopy Tower, I headed directly up to the observation deck. Spring migration was in evidence as many swallows, mainly barn, headed north.

The gray sky was also filled with black and turkey vultures. To the north I saw two white hawks come together, interlock talons, and spiral towards the ground, wings held out at a tight angle. Spring was definitely in the air!

Directly above, vultures turned. A black, a turkey, pause, and then, the king! The two-toned adult with the head of many colors shouted our: king vulture!

The king vulture (Sarcoramphus papa)  was and is an amazing bird to see on my first stint on the Canopy Tower’s observation deck and I would not see another king anywhere else in Panama until . . .

My final day in Panama

When I assented the stairs to the observation deck, I had added 98 lifers to my list and my world lifelist stood at 1,037 species. I had finally reached a personal birding milestone.

This was no mean feat that took almost 20 years, six countries, 11 states, thousands of miles, many shoes, and four pair of binoculars.

To the north I spotted the unmistakable profile of the wanderer. Peregrino as it’s known in Panama, the peregrine falcon. There was much rejoicing as the peregrine passed over our heads and out of sight. 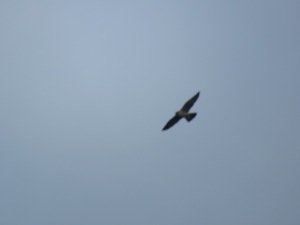 Shortly afterward, as most of the observers headed down for breakfast, I saw a small kettle pf vultures was over head. Black and turkey and then a much larger vulture was among them, the king, my bookend bird: the king vulture.

This was a great bird to end my time on the observation deck of the Canopy Tower on my last birding on the isthmus of Panama.