In the morning we had breakfasted at the Puembo Birding Garden (22 minutes from the airport), and were now on route to Yanacocha Reserva at 11,000 feet above sea level. This would be one of our highest birding locations on our nine day tour.

After an hour and a half drive, the last part of which was ascending a rutted dirt road that looked scarcely wide enough to accept the width of our bus, we pulled into the parking lot of the reserve. The bus doors opened and we stepped out into the chilly mountain, morning air. 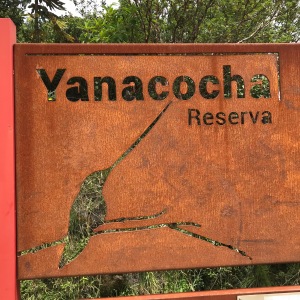 Yanacocha was established as a private reserve in 2001 by Fundación Jocotoco and now encompasses 1,200 hectacres. On the sign to the reserve was the silhouette of one of the key hummingbirds to see an Yanacocha and we were 10 yards down the trail to the hummingbird and banana feeders when our guide, Luke, spotted our target bird, silhouetted agains the high Andean air, perched up in a bush.

The sword-billed hummingbird (Ensifera ensifera) is a unique member of the hummingbird family, in fact it is the only member of it’s genus. The sword-billed has the longest bill length compared to body size than any other bird in the world. Their bills can be 10 cm long, making it impossible to preen itself but making pollen gathering possible from flowers with longer long corollas, in accessible to other hummingbirds. 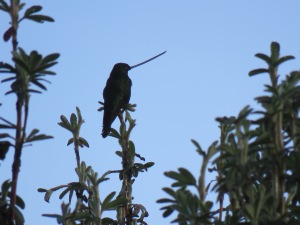 The sword-billed is ours!

When we approached the feeders, three Andean guans were in attendance. This would be the first of 11 birds with “Andean” in it’s common English name that I added to my world birdlist. 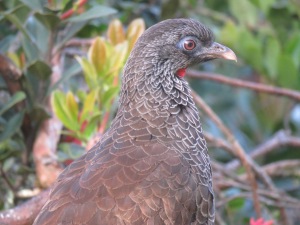 After watching the feeders we proceeded down the level trail to the hummingbird feeders that were about a mile from the entrance. We observed more Andean gems, including more sword-bills.

We then headed further down trail to see if we could find the owl that had been observed a few weeks before, hunting hummingbirds at the feeders. Luke played a call and within second there were three white-throated screech-owls above our heads. One landed on a branch eight feet directly above my head. A raise my camera to to eye and took the following photography. It lingered long enough to do a quick sketch but in the moment my pencil and sketckbook stayed in my pocket. 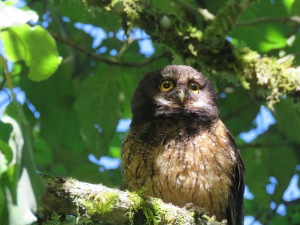