It is also one of the largest flying birds in the world with a wingspan of ten feet and a bird that was on the top of my Ecuadorian wish list, so much so that I took an extra day and hired a guide to take me high up in the Andes, and hour and a half from Quito. It is the Andean condor!

My guide Gustavo picked me up at my lodging at the Puembo Birding Garden and we headed southeast, our destination: the Antisana Ecological Reserve. The Reserve is centered around the 18, 714 foot volcano Antisana. The high Andes are perfect place to see the true giant of the Andes, the Andean condor. 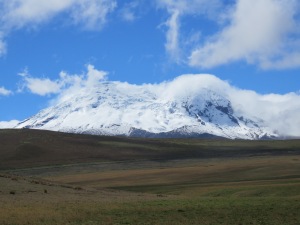 The cloud hidden peak of Antisana. At 18,714 feet is is the fourth highest volcano in Ecuador.

After winding our way up from Quito on streets that got progressively narrower and more rustic through small villages we stopped for a mid morning snack and caffeine break at the appropriately named Tambo Condor Restaurant.

We stepped out on the patio and watched a giant hummingbird at the feeder. We were here to see another giant. Gustavo focused his scope on a distant smudge that was just to the left of the thin cascade of white that was falling from the cliff.

“There’s your condor,” he announced as he stepped back.

Centered in the scope was an adult condor, preening on a cliff ledge. Lifer! This was just the opening act. Looking down the valley, with the sprawling capital in the distant haze, three condors appeared on the wing. They rose up from the valley and flew above the cliffs, one condor coming in for a cliff landing.

Over the course of out time in Artisan we saw about eight condors. A true treat to see this slowly declining species and a symbol of the Andes Mountains.