The final stretch of my Highway 49 road trip was by far, the most scenic of the entire highway. The last 109 miles, from Grass Valley to where 49 ends at junction with Highway 70 at Vinton, takes you to higher elevations than at any other part of the highway and the highlight was Sierra Valley. 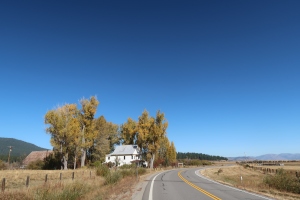 At about 5,000 feet above sea level, Sierra Valley is a broad, flat valley, rimmed by low mountains. When driving this lone stretch of 49, you are more likely to encounter cows than other people. This is a stretch of 49 that encourages reflection and peacefulness. They are a few towns along the way: Sattley (Population 49), Sierraville (Population 200), and the jumping metropolis Loyalton (population 695).

Population: 49 on Highway 49. I wonder how often this coincidence takes place?

Where as the first part of 49 from Nevada City was television, hemmed in with trees and cliffs, entering the Sierra Valley was like watching a wide screen western epic. I was passing through a John Ford film, without the monuments of Monument Valley but the wide open spaces that are not always easy to find in California. It’s a type of landscape that would make Bing and the Andrew Sisters croon, “Give me land, lots of land with the starry skies above, don’t fence me in”. 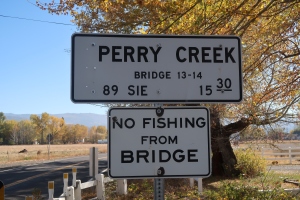 I finally found “my” creek!

The benefit of being in Sierra Valley in October is that wintering raptors are starting to take up their winter quarters. I started to notice an uptick in red-tail hawk numbers, perched on the power poles. This is a very common hawk in the west but their numbers were a little uncommon.

Then I saw a large pale hawk off to the left. Now this was a true winter visitor to the valley. This was our largest buteo ( broad wing hawk), the ferruginous hawk. Buteo regalis! I pulled over and grabbed by car binos. Above one wide cow pasture there were three ferruginous hawks in my field of vision! The most I had seen in the sky at one time. 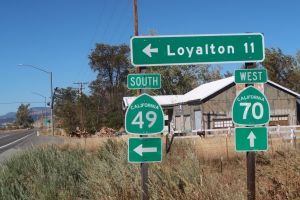 Here’s where Highway 49 begins in Vinton and it’s where I turned around and headed south for the first time on my road trip.

Once I had driven to the highway’s end at Vinton (Population 0) I headed back south and I stopped to photograph a highway sign with the scenic background of Sierra Valley. I looked up at the power pole and there I saw another wintering raptor perched on the cross arm: a prairie falcon.