The first stop of the streamlined Daylight out of San Francisco was Palo Alto, the town on the doorstep of the Stanford University campus.

There were two stations on this site before the current station was built in 1940-41 ( The cornerstone was laid on October 22, 1940). This Station was designed in the Streamline Moderne style to reflect the streamlined train sets of the Daylight that stopped to pick up passengers on their way to the southlands. The luscious curve of the station’s roofline is echoed in the sloped skirting of the GS-2 steam engine that pulled it’s twelve-car consist to Los Angles. 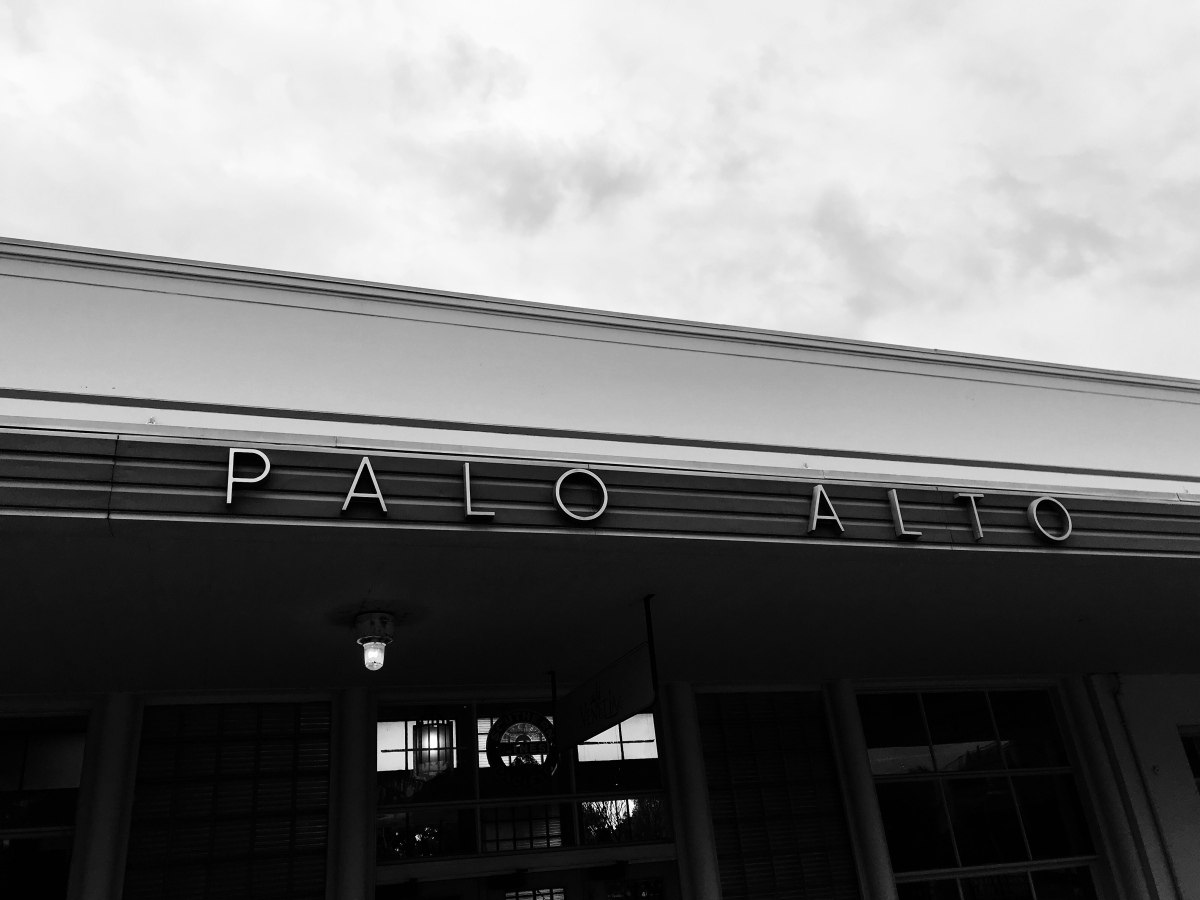 I really love this station and enjoyed sketching it’s streamlined profile. Looking up at this station, hemmed in by dark-grey skies, transported me back the 1940s. I felt like I was a two-bit character in a Film Noir, say Double Indemnity (1944), for instance.

The Coastal Route and Palo Alto are briefly featured in this seminal Film Noir, considered by many to be the best Film Noir ever made. The plot involves the murder of a husband by his wife and her lover. The husband, “a Stanford man”, is heading to Palo Alto from Glendale on a Southern Pacific passenger train for a class reunion. Mr. Dietrichson never made it to Palo Alto Station or his reunion. Any more information about the plot would surely be a spoiler.   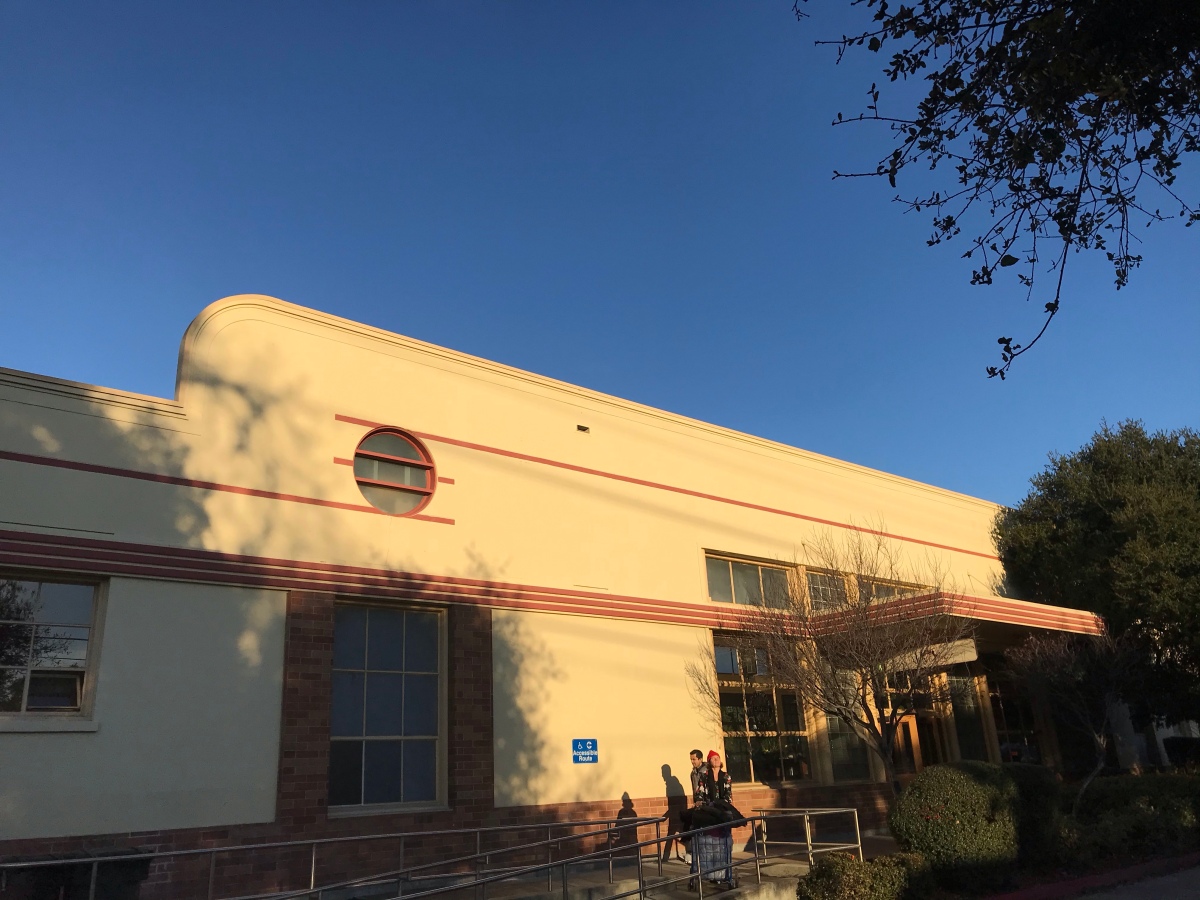 I took the number 424 Caltrain from Millbrae at 10:04 AM and I got into Palo Alto at 10:46. I had already scoped the station on a previous visit and I knew that I really wanted to sketch the curvaceous roofline and the round window from the street side entrance of the station.

What I was trying to do with the curvaceous roof was not to sketch the station in it’s entirety but focus in on it’s most emblematic elements. This was a refreshing approach because I chose where I wanted to frame my drawing and I left a lot of other details out of frame.  

After I had finished the sketch and painted it, I went around to the front of the station, on the northbound platform and did a quick sketch of the profile of Palo Alto station.  This is the view you see from the train.

One of the treats of Palo Alto Station is to be found on the inside of the building. This is the 1941 mural painted by San Francisco artist John MacQuarrie.

The mural was complete for the March 8, 1941 dedication ceremony of the new Palo Alto passenger station where the mural was unveiled. 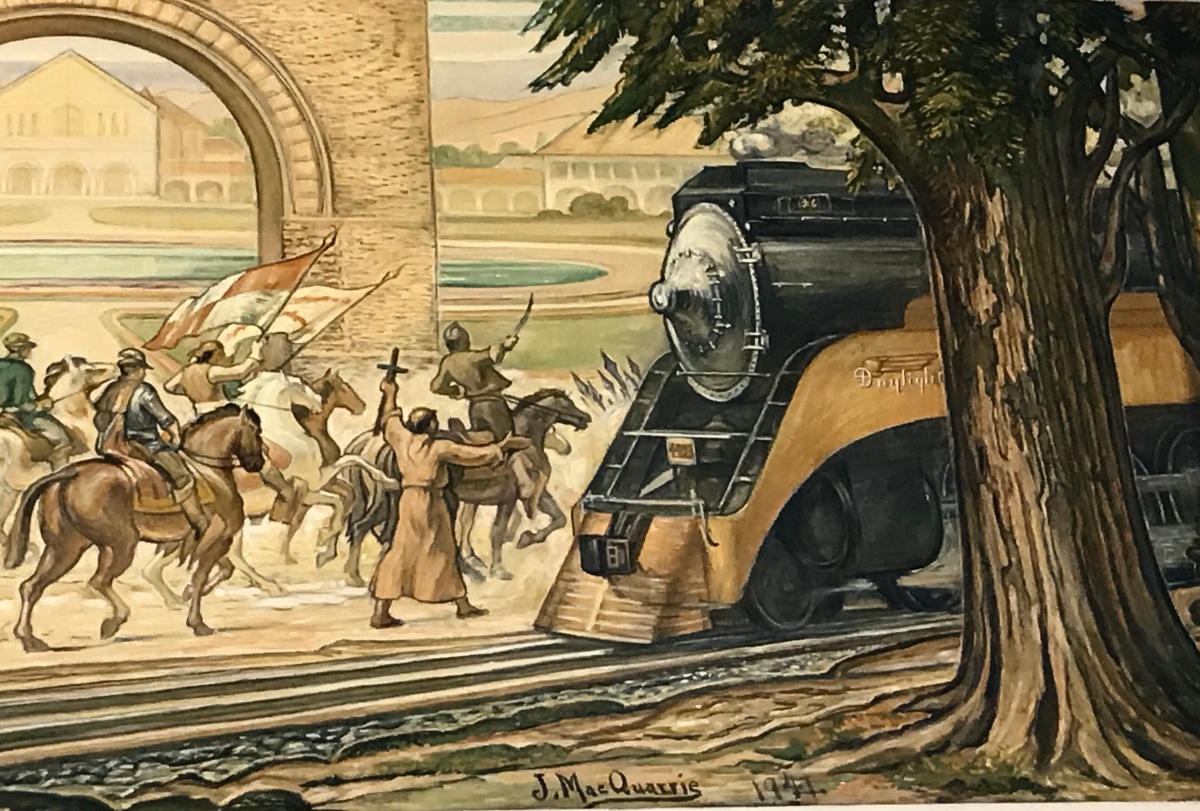 The mural stretches above the wall where the ticket counter is. It depicts the past and future of transportation. A stream of men on horses, Indians with travois, wagons, stage coach, and men and women walking on foot, head to the right with the quad of Stanford University in the background. In the lower left corner the profile of Leland Stanford looks on towards the future of transportation (circa 1940). The future seems to come out from behind the trees as a Daylight GS-3 locomotive proclaims it’s entrance into the mural. This certainly a synthesis between a beautiful and functional form of transportation and a building that does the same. 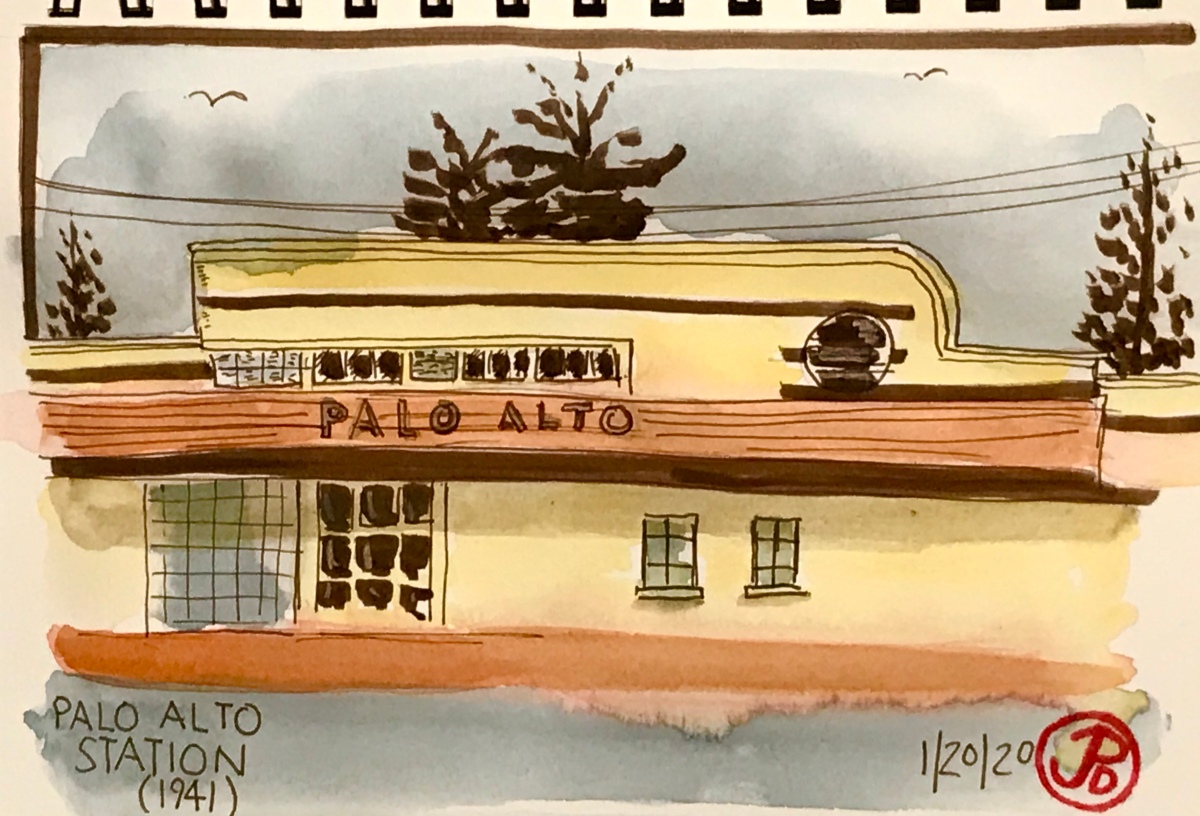 Here is my quick sketch of Caltrain’s most “modern” historic station. I left details out, like the door into the station. I was really trying to get the shapes of the building.