After a hiatus, because the loss of my father and my laptop, I am back to blogging with a new laptop and a new watercolor journal ( the Pentalic 100-Persent Watercolor Journal 5-Inch by 8-Inch).

I filled the navy blue journal with a trip to our Nation’s capital. In a sense, Washington DC is a city of the dead. It’s populated by memorials, monuments, and statues, all dedicated to someone (usually a white male) that is no longer on this earth or to some past war and it’s fallen heros . Not to mention the grassy expanse of Arlington National Cemetery, just across the Potomac River from the Lincoln Memorial (the featured sketch was painted on the Arlington Memorial Bridge as I was returning from the thought-provoking rows of earth solders.)

Just to give you a further example that Washington is a city of the dead is underscored by my itinerary on my first full day in Washington:

Started the morning with a visit to Ford’s Theatre where Lincoln was assassinated . Sketched the clothes he was wearing as he was watching the play, the Presidential box where he was sitting, and the single shot pistol that Booth used to shoot the President. After the theatre tour I crossed the street to see the room in the boarding house where Lincoln passed, the morning after he was shot.

I then headed down Tenth Street to the National Museum of Natural History where I sketched the largest male bush elephant mount in the world (he did not die of natural circumstances) and a very special speciem: “Martha” the last passenger pigeon in the world, which died at the Cincinnati Zoo. The passenger pigeon was considered to be the most numerous bird in North American. A flock of these pigeons was said to take days to pass.

I ended the day at the Vietnam War Memorial Wall and the Lincoln Memorial. The Lincoln Memorial is a wonderful place to visit at night when the crowds die down and you can really get a sketch in without having to dodge large groups of eighth graders armed with “selfie-sticks” who don’t seem to know how to behave in a memorial. Grumble, grumble. 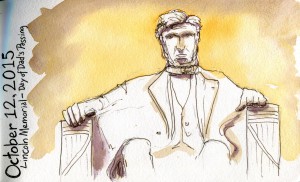 One thought on “Washington DC: The City of the Dead”