One of the  most daunting war memorials for me to sketch was the Vietnam Veterans Memorial. I had to experience that dark, reflective V, that seems a gapping scar in the green grass, a few times and from different angles before I could put pen to paper. The memorial is continuously crowded with visitors and veterans and I had to decide if I was going to include these people in my sketch. I finally decided to start sketching on an afternoon on one of my last days in a Washington. I selected a park bench that was across a tree dotted expanse of grass. The park bench faced the opposite direction so I had to sit on the edge and backwards. In the end I chose a simple expression to capture the memorial; without people and much color. In the end, like the memorial itself, I kept it to a simple expression, devoid of excess detail.

When I arrived in DC, I headed out from my Georgetown digs and found my way towards the Lincoln Memorial. It seemed like this is a flame that attracted visitors from all over, who sat on the steps and looked out over the reflecting pool toward the exclamation mark of DC: the Washington Monument.

I started my first sketch of the trip. Where I sat and sketched was just off the right shoulder of where Martin Luther King Jr. gave his famous “I Have a Dream” speech on August 28, 1963. On that day 200,000 people filled the National Mall on either side of the Reflecting Pool. Visiting this spot, this sacred ground, was truly a highlight of my visit. Ever since I had seen excepts of the grainy footage of the”I Have a Dream” speech on television, I have been enamored with King and his words.

I did a sketch of the Martin Luther King Jr Memoral (dedicated August 28, 2011). One of  his quotes that was carved into the marble wall came from California  in 1967.  It was a contrast to the war memorial on the other side of the mall, or maybe it really had the same meaning:

I oppose the war in Vietnam because I love America. I speak out against it not in anger but with anxiety and sorrow in my heart, and above all with a passionate desire to see our beloved country stand as a moral example of the world. 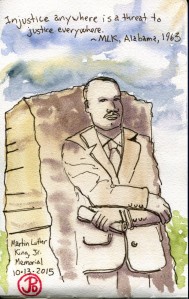 On this Veteran’s Day the wars of the world and particularly the Vietnam War has a face because of the veterans I have know who fought in that conflict. It forever changed them in ways I can never fathom. I thank them for their service and sacrifice.

One thought on “Vietnam and Martin’s View”