We all seem to like making lists. Ingredients for a new recipe, the starting line for a football match, our favorite books or records (a top ten list) or the list of friends we want to invite to a dinner. The list goes on for ever.

I have recently kept a school list, that is, all the species of birds seen from my school site. The birds could be on the green field, in the trees and bushes, or high above. The only criterion is that I have to see the bird with my feet firmly planted on campus in order to put the bird on the school list.

Let me give you an example of a bird that I was not able to put on my list. One morning as I pulled off the freeway and turned left over the overpass, I spotted a raptor circling off to the south. I pulled off, grabbed my binoculars from the trunk and focused on the raptor catching the warming air off the roadbed. The bird came into focus: adult bald eagle!

I rushed back to the car and headed up the hill to school. Pulling into the parking lot I scanned the horizon for the eagle. My view was obscured by houses and trees. Despite my search, I could not add bald eagle to my school list. But I tired.

What drives a man to want to put a bird on a list?

One of the main problems with listing is that birding becomes more of a sport than an encounter with nature. It becomes simply ticking off a name on a list rather than a celebration of recognizing a bird, that bird, turning on that branch above my head. A birder might say, “It’s just a robin.”  And master birder Rich Stallcup would reply, “ Yes but have you seen that robin?” There is much that is lost with listing and I have been guilty as any birder.

My current school list sits at 28 species. Bird 28 came one morning before school. I was on the yard asking a colleague a question when I looked up, as I am prone to do when I am out doors, an I saw the helmeted flying crossbow. I pointed skyward  and yelled to any students that were within earshot, “Peregrine!” School list bird #28. Can I get an witness, Amen?

Once you travel outside the United States, the world of listing takes on a whole new, a massive, perspective. Now you are in the realm of World List! There are currently about 8,669 bird species on planet Earth. So I have a lot of  birding to do.

My first experience birding outside of the States was a 2008 trip to Japan. I was not really birding because I left my binoculars at home but there was a freedom in birding with my brown one by ones. I was not on this trip to bird but once you start to bird you can’t take your eyes and ears off of birds. On this trip I, for the first time, used a Moleskine watercolor sketch book, and I have fallen in love with the format ever since. The following three sketches came from the life list that I kept in my Moleskine. 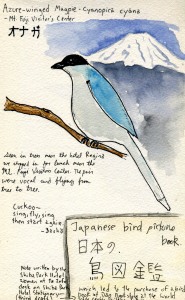 The azure-winded magpie has a very odd distribution. It is found in Japan, where I saw it, and it is found in eastern Asia and there is an island population in southern and central Spain. I will see the bird again at the end of March as I will be going on a birding trip to Spain. 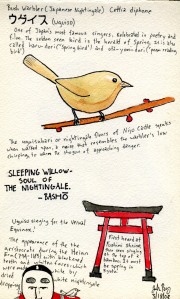 There was one bird which I desired to hear more than any other bird in Japan: the bush warbler (Japanese nightingale). This bird is celebrated in Japanese poetry, prose, and film as the harbinger of spring. I finally heard the bird in Kyoto at the beautiful Fushimi Shrine on my final morning in Japan. I first heard the unmistakable call and I rushed over the where I finally spotted the drab bird calling in a tree.

I added that bird to the world life list! 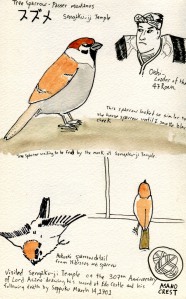 The tree sparrow was an ubiquitous bird in Japan.