One afternoon I was listening to one of my father’s Duke Ellington CDs, a CD that I had gotten him for Christmas a while ago. My father loved big bands and he saw Ellington, Basie, and Ella as well as west coast greats Brubeck, Cal Tjader, and Vince Guaraldi. It was one of those beautiful February afternoons where the trees have blossomed early and the White-crowned sparrows were singing at the tops of trees to mark out their patch. It seemed to me, and the sparrows, that it was a spring day. As I was listening to Ellington the white-crown in the backyard seemed to be singing with the band so I wrote a poem about it and created a spread.

as Cootie floats above

Hodges leans into his solo

squeezing every ounce of joy out of his horn

and the Rabbit responds

Long after the strains

of Mood Indigo had ended

and the curtain of dusk has fallen

the only song he knows

at the top of the berry bush

just outside my window

defining his place in the band

as the day’s heat turns to blue.

I added two illustration as “bookends” to the text, one was sketched from the Ellington CD cover and the other was from a photograph of a white-crowned sparrow.

This spread was about my experience watching California condors at Grimes Point in Big Sur. it was a magical day with about ten condor perched by Highway One. The drawing is based on a photograph that I took and the condor’s massive wingspan seems to span the coastal hills in the background. I wrote a poem about the condor, included underneath it’s wings. 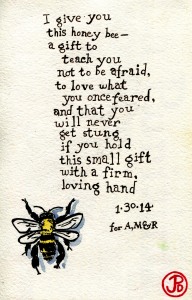 This poem is about my philosophy of nature, that we should not fear nature but embrace it. The poem is dedicated to three of my students as I taught them not to fear the honey bee. During recess on day, I found a bee on the blacktop and I picked it up and showed my students that they had nothing to fear. I then let the bee crawl on their hands and they learned that if you treat nature with respect and acted with confidence the bee will not cease its life by stinging you. I don’t think that lesson is a California State Standard!

This spread was created to illustrate a poem I wrote shortly after my fathers passing in October. It’s really about accepting what life has dealt you and coping with change.

One thought on “Sketch Poetry”