One of the more odd and interesting things that I visited in the Mojave Desert was found north of Joshua Tree. It was a twenty minute drive on a lonely desert country road that led me to the town of Landers. The town’s slogans is “Beautiful Skies, Miles of Smiles”.

My destination was off the main road at the end of a T junction. As I approached the junction, the white dome appeared on my right. This was my destination: The Integratron! 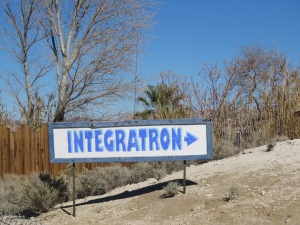 If your first impression of the Integratron is of a flying saucer that has landed on earth for repairs you wouldn’t be too far from the truth.

The grounded spaceship was the cosmic brainchild of George Van Tassel (GVT), who was a ufologist who claimed to have a telepathic connection with beings from the planet Venus.

According to the Integratron’s website, “the structure is based on the design of Moses’ Tabernacle, the writings of Nikola Tesla and telepathic directions from extraterrestrials”. And the building, which was not constructed with a single nail, was funded by donations by Howard Hughes and by hosting UFO conventions on the site in the 1950s through the 1970s. Construction was started in 1957 and was not finished until 1960. 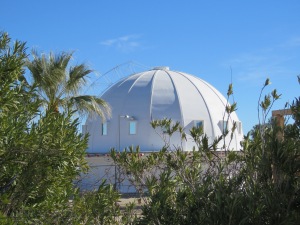 But what was the building built for, aside from returning to Venus? Again according to their website, the building “was designed to be an electrostatic generator for the purpose of rejuvenation and time travel.”

After GVT died in 1978, the building was bought by three sisters and the space is currently being used for “sound baths”. Not sure if this craft will ever make it back to Venus but I might stop by for a bath.