It was a good omen to see a large raptor perched on a snag just after I crossed into Santa Cruz County on Highway 1.

I was not sure what the raptor was (hard to identify at 70 miles per hour) but it certainly was not a red-tailed hawk, it was much bigger. I was thinking more eagle-like.

I passed Waddell Beach and turned around at the soonest point. I headed back and pulled into the dirt parking lot at Waddell State Beach. Once I got bins on the bird, I had no doubt that I was looking at an eagle. Not a golden but a juvenile bald eagle. Perhaps a second or third year bird. Welcome to Santa Cruz County! What a great afterwork bird!

The next morning, Saturday, I headed to Tryrrell Park, just behind the Santa Cruz Museum of Natural History to look for a wayward warbler that had recently been spending the winter among the oaks and willows. Within about ten minutes I had the small, grey warbler, foraging in the willows with a Townsend’s warbler. A Lucy’s warbler. What a rarity and what a great county bird!

I then headed across town to the Natural Brides Overlook just off Westcliff Drive, to looked for a reported ruddy turnstone. It was not there but a local fellow Santa Cruz Bird Club member was there looking for the same bird with a scope. Together we found some nice birds: whimbrel, black turnstone, black oystercatcher, back-bellied plover, Heerman’s gull, and a close female white-winged scoter on the water.

We met a man with a large lens from Sacramento, our state capital, and he was photographing some birds on the rock. He was excited at adding Brandt’s cormorant and Heerman’s gull to his life list (these birds are not seen in the Central Valley). A father and son from the east coast walked up, telling use there was a hawk perched on a light post on Westcliff. What follows is the conversation:

Me: Now that would be a great bird to see here. (I put the raptor in my bins) Peregrine.

Father: It’s too big to be a peregrine.

In the meantime my club member compatriot has put his scope on the bird in question. And he asks me to take a look. I looked.

Dad: They are smaller on the east coast.

Size is not a great measure for field identification because birds can often seem larger when they fluff up their feathers and in raptors occurs reverse sexual dimorphism, which simply means that females are larger than males.

I got some beta from the club member about a bird in the county that I needed to add to my lifelist. I had lackadaisically searched for the Santa Cruz County resident with no luck. Why? First I was searching in the wrong place and secondly, the bird was an exotic species which had been introduced to California.

Exotic species are an odd one when it comes to listing. They could be escapees and normally you cannot count them but if they have a established and sustained breeding population, such as the European starling or the Himalayan snowcock, then they can be counted. With the ABA’s approval of course.

So I headed down Highway One towards Watsonville. My destination: Pinto Lake City Park. The bird in question, according to my beta, was to be found in the reeds near the picnic area, just to the right of the dock.

At the moment the dock was inundated with the Devil’s Bird: great-tailed grackle. There must have been about 30. I searched the reeds and got a brief view of my quarry before a flock flew to the other side of the dock.

I walked over and followed the sounds of the flock moving through the reeds. I final got great views of lifebird # 1,666 (a global pandemic really spoils a world life list). Here was a flock of 12 scale-breasted munias. This small sparrow-like birds are native to Asia and India. How they got here, no one really knows.

I took young Grasshopper Sparrow to one of my favorite birding locations in Santa Cruz County, the Old Cove Landing Trail, at Wilder Ranch State Park.

Birding in the spring is a pleasure as you see returning migrants and signs of newborn life. Males are defending their territories in song and are frequently seen perched on prominent singing perches giving a birder great views!

One lifer on Grasshopper’s list was a pigeon guillemot, an alcid that is not a pigeon but a bird of the near shore. Once we hit the coast the guillemots were an easy tick with many on the water or resting on cliffs. We had sensational views and we moved on down the coast in search of more signs of spring. 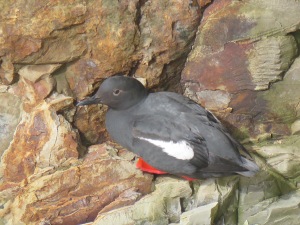 The spring pleasures are not only reserved to the avian world. As we were about a mile down the trail which follows the contours of the coast, a long-tailed weasel crossed our path! Perhaps an adult hunting to feed its growing kittens. We watched as it’s black-tipped tail disappeared into the green grass.

My young acolyte, Grasshopper Sparrow’s spread about our brief encounter with a life mammal.

We continued on and were rewarded with a black phoebe nest with a near fledgling. Grasshopper thought the chick was dead but I suggested it was just in instinctual frozen mode at the sight of two large bipeds approaching.

We then headed back, adding more lifers to Grasshopper’s growing list and I wanted to check in on another sign of spring just south on Highway One at Natural Bridges State Beach. The eucalyptus grove here is known for the 150,000 wintering monarch butterflies. Most were gone now. We were here for owls! 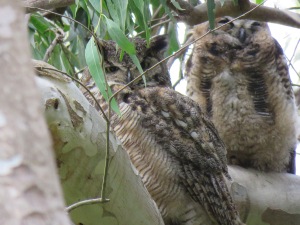 From the butterfly viewing platform we easily spotted the two adult great horned owls with their recently fledged owlet. These owls start their breeding cycle early as the don’t construct their own nests. Instead they borrowed a red-shouldered hawk’s nest.

As we headed out, the local male Bewick’s wren was perched up, proclaiming his place in the world. 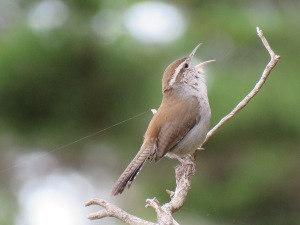 “No flesh-eating creature is more efficient, or more merciful; it simply does what it was designed to do.”

On one Saturday I was birding Natural Bridges State Park when I saw a bird in direct flight. Stiff wingbeats, with prey clutched in it’s talons. It perched in the top of a Monterey pine at the back entrance to Natural Bridges. I knew what the bird was and I headed closer to affirm my hunch and see what it had taken for it’s mid afternoon repass. Dark helmet with sideburns, a bird that is affectionately called “Elvis” by hawk watchers on Marin Headlands Hawk Hill. Peregrine Falcon, Falco peregrinus, the fastest animal on planet Earth.