I’ve been wanting to do a sketch project of the passenger railway depots along the current Caltrain line; at least the stations that are architectural and historically interesting. Caltrain runs passenger service from San Francisco to San Jose (and further south to Gilroy). I wanted to narrow the project down to the existing depots in San Mateo County, the county where I am employed.

My own interest in railways and railway depots comes from my own childhood. I have very vivid memories of being on the back of my dad’s bicycle as we went down towards to the Southern Pacific tracks after work. My dad was a huge rail enthusiast having grown up riding the streetcars and trains of San Francisco. We would watch trains from the pedestrian walkway as they came in and out of the Sunnyvale Depot, dropping off commuters.  We also took the train north to Palo Alto or San Francisco and I always loved the all too brief visits to each station. I also noted that not all stations were alike. Some depots have architectural merit while others were merely weather shelters where you can buy tickets.

I wanted to start in the north and head south towards the Santa Clara County line. But I would not be starting on the current main line that runs along the eastern part of San Francisco and the Peninsula but the starting point for this project is a marooned station that is west of the main line. This station has been moved a short distance from its original location and now does not have any trains that stop at its platform. It is now part of a historical museum. This is the passenger depot in Colma.

The original mainline passed further west as it headed around San Bruno Mountain than it does today. The second stop, south of San Francisco County, which is in San Mateo County, was then called School House Station because of its proximity to the local one room schoolhouse. At the time this was one of 21 stations built between San Francisco and San Jose. The station was later renamed Colma.

In 1907 the Bayshore Cutoff came into service which straighten out the line to where the main line runs to this day. This new line left Colma off of the mainline like a rerouted highway, taking all the traffic away, leaving a ghost town in their wake. That may be appropriate because Colma is known for all it’s cemeteries. The number of dead in Colma, estimated at 1.5 million, outnumber the living. Hence the town’s motto, “It’s great to be alive in Colma!”

So I set up a sketching chair, readied my supplies, and started to frame in the railway depot. Here I really tried to get the perspective correct before I added pen or paint. This starting part of the sketch takes the most focus and concentration. 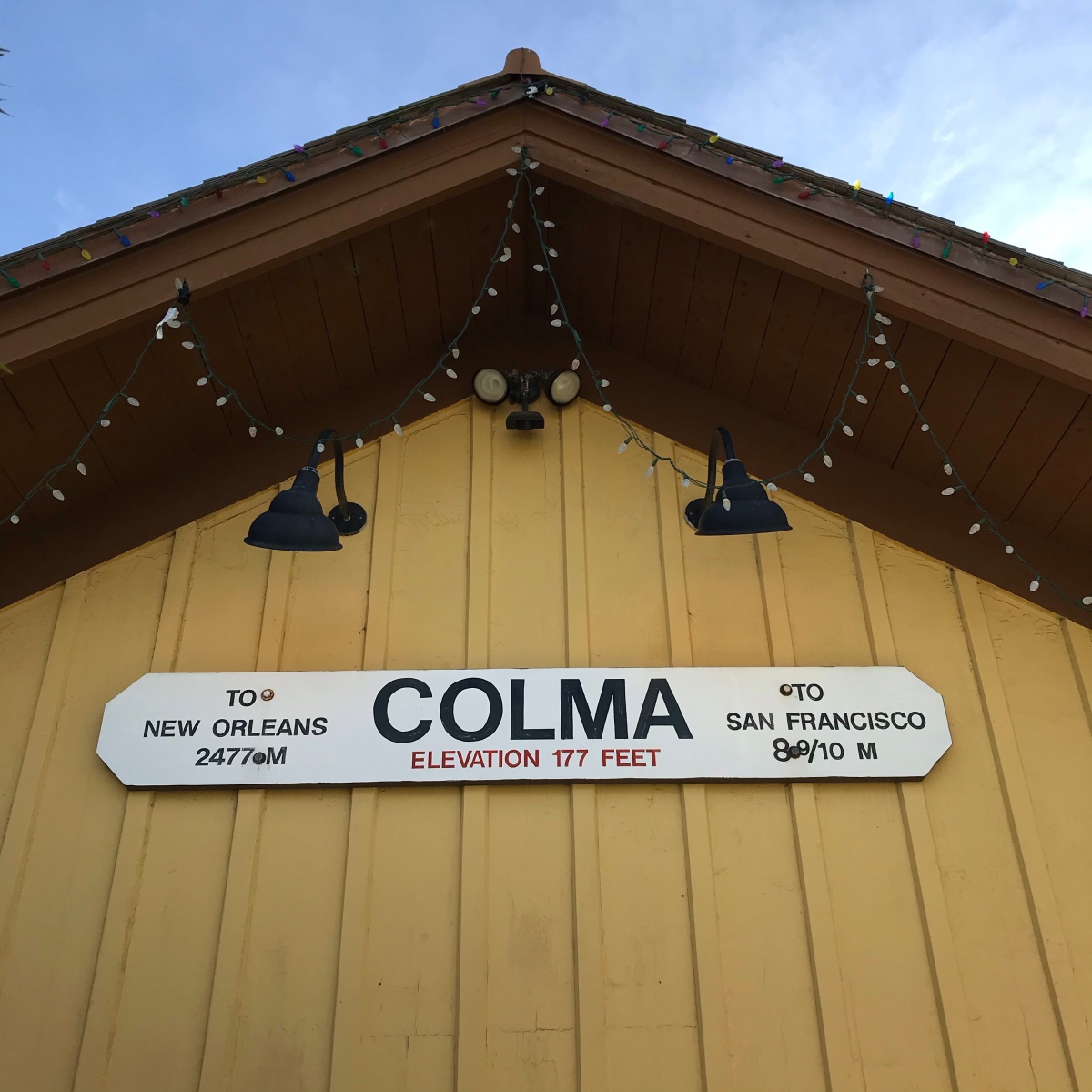 Another reason the Colma Depot was a good starting point for this project is that it was the oldest depot on the line, built around 1863, beating out the actual oldest station on the Peninsula mainline at Menlo Park, built in 1867.

Starting with the Colma Depot was a bit of a cheat, because it is no longer an active depot nor is it on the main line. But because the river of rails have been diverted to the east leaving a pool that no longer flows to the sea, I felt it was important to start here, at least to get my feet wet. It was also helpful to start to learn the visual language of Californian train depots. It helps the eye see repeated patterns and forms when I move on to sketching other depots.

My next plan was to ride Caltrain from San Francisco down to all the historic stations in San Mateo County and sketch each one.  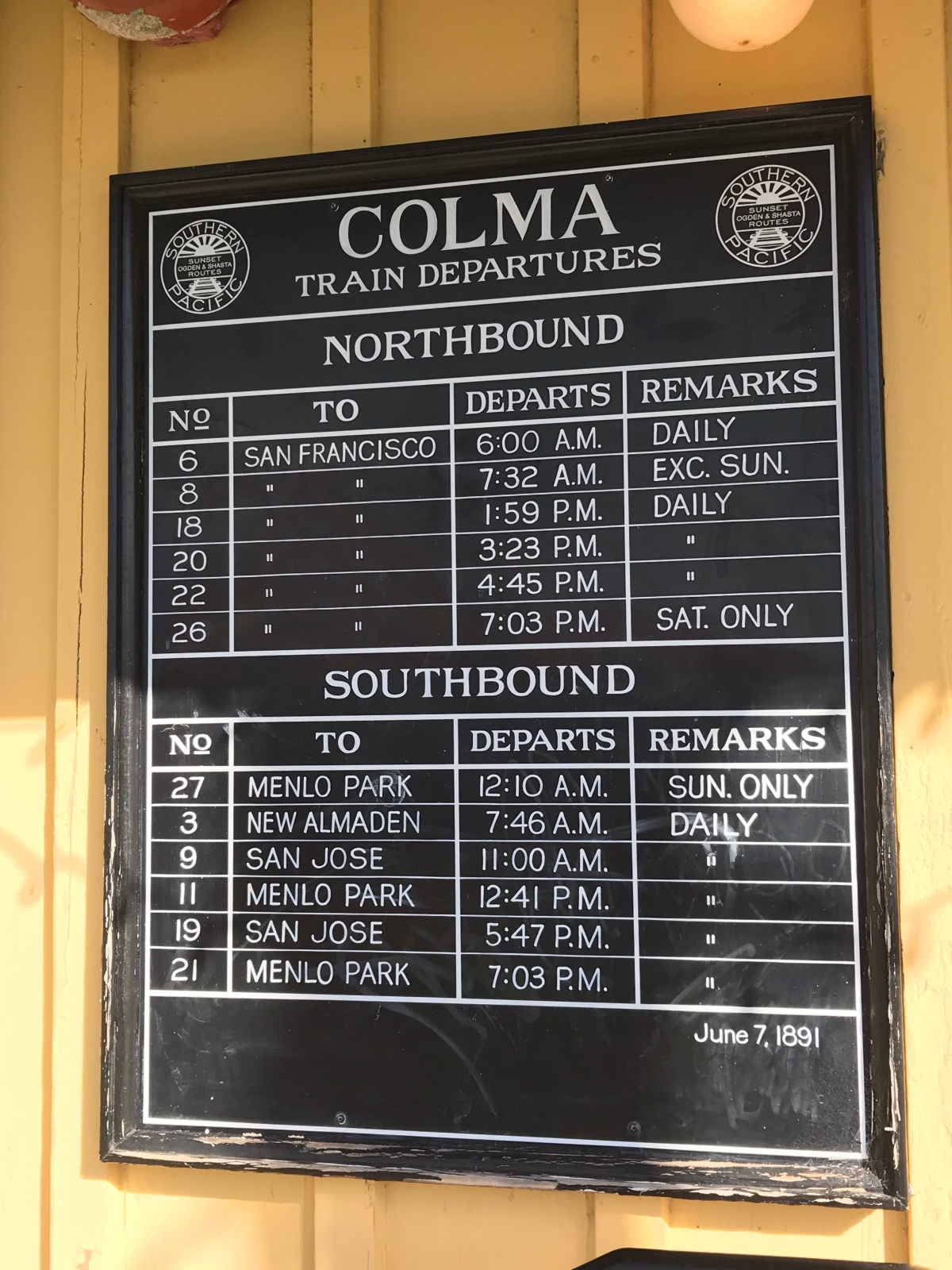 Sketch number one of this project is nearing completion. The rusted tracks in front of the station are just a short section. They go from nowhere to nowhere. Just like many of the visitors to Colma. Once they come here, they never leave.