There are two Southern Pacific water towers remaining in the Bay Area, one in San Jose (near the passenger station) and one further south on the Coast Line in Coyote.

I headed to Santa Clara County, the county of my birth, to the Valley of Heart’s Delight (Silicon Valley). The small, blip of a town that is Coyote is south of San Jose and just north of Morgan Hill.

Coyote is on the Coast Line, a 470 mile route that connected San Francisco and Los Angeles. SP’s famous passenger service, the Coast Daylight, blew through Coyote. A resident of Coyote wishing to catch the Daylight to Los Angeles had to either head to San Jose or Salinas. Coyote has a passenger station that was in service until December 10, 1958. The building still exists but is now abandoned and boarded up. At one time it was a private residence.

Before heading down to Coyote I stopped off at the town where I grew up: Sunnyvale. As I exited off Highway 280 and headed north on Sunnyvale Saratoga Road, I reflected, as I always do when I’m in Sunnyvale, on how much it has changed from the 20 odd years I spent here.

Along the road, there were things that where very much the same, such as the Longhorn Restaurant on the right (I don’t think I every ate here), and to the left is Fremont High School. The 1925 main building looks very much the same but according to a family friend, who is an assistant principal at Fremont, a lot of renovations are happening on campus.

The reason I turned off the highway was to see another water tower in the South Bay. This tower was not built by Southern Pacific, although it sits just north of the Coast Line. Before Silicon Valley, this area was known as the Valley of the Heart’s Delight and the valley was covered in apricot and cherry orchards.

According to the Sunnyvale orchardist, Charlie Olson, there used too be “eight to nine million” fruit trees in Sunnyvale. Now there are eight to nine hundred.

To process all the fruit, canneries where built along the railroad line. My father, after coming home from work, would put me one the back of his bike and he would ride on the same route he had just come from. He spent his working career at Westinghouse which was also right next to railroad.

During the harvest season, a favorite destination was a pedestrian bridge over the railroad. From this vantage point we could watch commuter trains come and go and also we could look down into the yard of one of the canneries. Here forklifts moved at a frenetic pace and I can still recall the persistent din of the processing plant as workers canned ripe fruit to be shipped, by rail, to the nation. At this time, in the mid to late 1970s, Sunnyvale very much had one foot in the agricultural word.

This cannery was the former Schuckls Cannery which was later bought by California Canners and Growers in 1963. It was in operation until the cannery was demolished in 1984. The year 1984 was a auspicious year in the valley, it was in this year that Apple introduced the Macintosh computer.

This was about to change as the valley and it’s orchards were slowly replaced by Silicon Valley. It is interesting that one of the valley’s sons recognized the beauty of this area but was also one of the catalysts for it’s demise. Steve Jobs, the co-founder of Apple, said, “Silicon Valley for the most part at that time was still orchards-apricot orchards and prune orchards-and it was really paradise.”

Can we say that Sunnyvale is now a paradise? Well I guess it depends on how you define “paradise’.

As I crossed over the railroad tracks as South Matilda Ave. become North Matilda, the water tower came into view.

The current water tower was built in 1965 and is shaped like a can of Libby’s Fruit Cocktail. This is all that remains of one of the biggest canneries in the valley. It is now surrounded by a business park with buildings occupied by Walmart and Raytheon.

Looking up at this water tower I can recall the sounds of the cannery working at full capacity, to can the bounty of the Valley of Heart’s Delight.

The Surfliner was an hour late and I would have even less time to spend with Santa Barbara’s beautiful station. I had to catch the number 14, Coast Starlight back to SLO at 12:40 PM. So I figured I had time for a quick 45 minute sketch and an even shorter lunch but I couldn’t wander too far from the station. Revisiting the “Queen of the Missions” was out of the question.

I walked around the station, “shaking hands”with the place. The Santa Barbara passenger station was completed in 1905 and designed in a Spanish Mission Revival style, very much reminiscent of Burlingame Station. This building has all the hallmarks of Mission Revival: arches, a star window (in imitation of Mission Carmel), and adobe tiled roof.

Santa Barbara Station was one of seven stations that the Coast Daylight served. The route parallels El Camino Real, the Royal Road, that connected 21 of the Spanish Missions along Alta California’s Coast.

The train station served the ever growing resort town on the Pacific Ocean that catered towards the high-end.

A sign of the wealth and affluence of this area is the Pullman car that is on static display near the train station. Pullman passenger cars where a huge improvement in comfort and safety from the rickety, wooden cars that were uncomfortable and sometimes downright dangerous. They were the height of luxury at the time, for the well-off passengers who could afford to ride on one.

But the Pullman car at Santa Barbara is something very different. In the later part of the 20th century, Pullman produced passenger cars for the extremely wealthy, that could cost up to half a million dollars, which was twenty times the cost of a standard Pullman passenger coach. These cars were considered “mansions on wheels”. They where coupled to the end of a passenger train and at Santa Barbara there were siding tracks where these luxurious cars would over-winter as their owners stayed in nearby posh hotels.

After my sketch I walked down State Street toward the Pacific Ocean and I was passed by a twenty-something driving by in a brand new Rolls Royce, a modern Santa Barbarian mansion on wheels.

Some things like the station and mission remind us of a very different time while others show us that things remain very much the same.

The town is named after the Spanish mission that was founded in 1772 by Father Junípero Serra. It became an important railroad town because it was at the southern end of Cuesta Grade.

It was a division point on the then Southern Pacific Railroad (now Union Pacific) and because of it, the town had shops to service the locomotives, a roundhouse to turn engines around, and a wye to turn the massive cab-forward around (because it could not fit on the turntable.) This large articulated 4-8-8-2 engine was designed to go through the long show sheds and tunnels over Donner Summit but later, in the 1950s, pulled freight over the coast line and acted as a help engine. 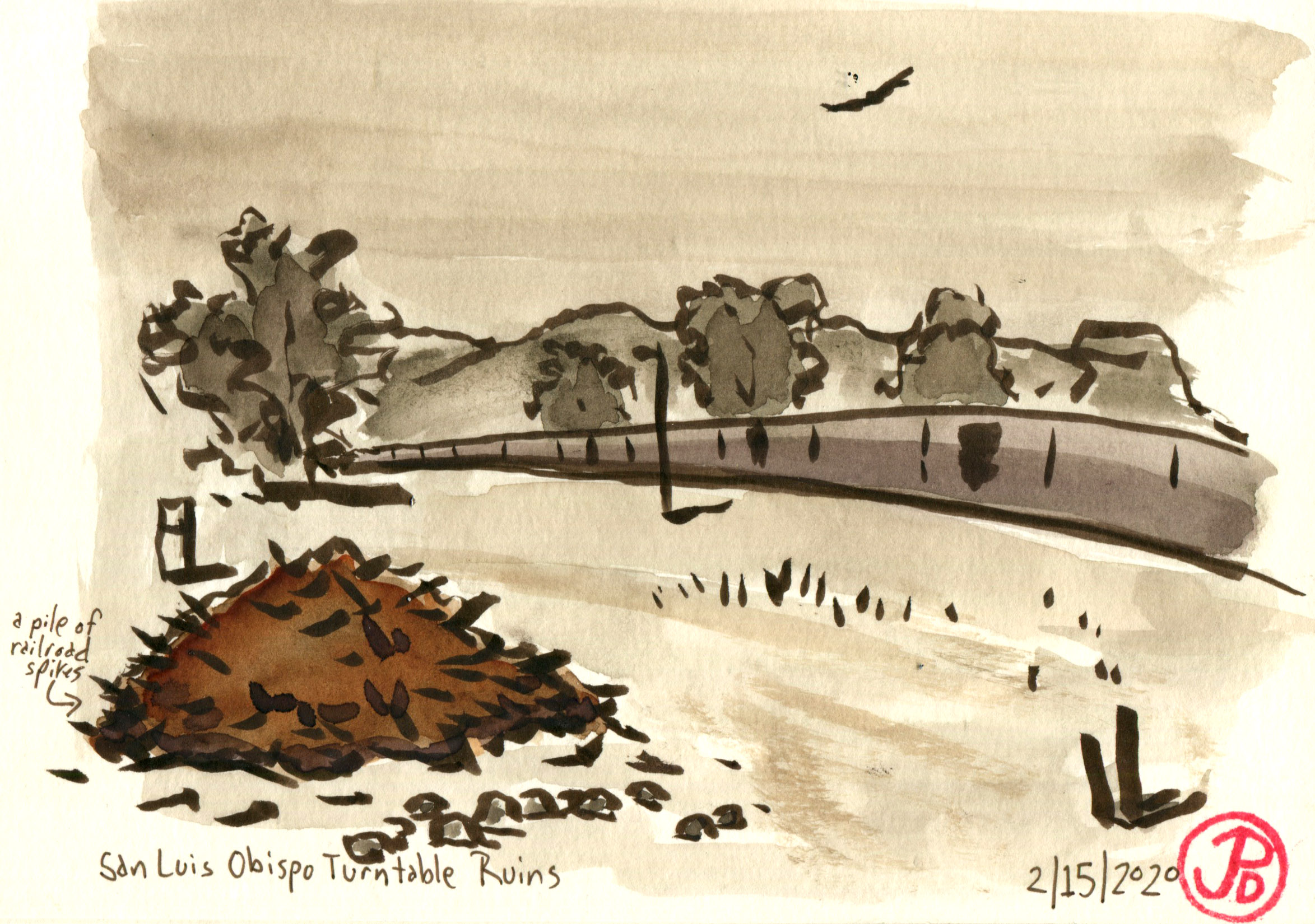 A quick brush-pen sketch of the site of the roundhouse and turntable. While now little is left of the roadhouse, at the height of operations, the yard employed 44 men. The pile in the foreground are rusted railroad spikes. The line of boxcars in the background have been waiting in storage on a track siding for three weeks.

It was here at San Luis Obispo that northbound Daylights took on a helper to make it over the Cuesta Grade and its where a southbound train had their helper locomotives taken off.

The passenger depot was built in 1943 in a Mission Revival Style, slightly echoing the Spanish Mission that the city is named after.

Across the tracks from the station is the 65,000 gallon water tower used to water the steam locomotives that worked this division. The tower was built in 1940 and has been saved from destruction by the city of SLO. Often engines and crew where changed here but the Daylight GS-4 locomotive would make the entire San Francisco to Los Angeles run without being changed out at San Luis Obispo.

The station is still used as a passenger station although freight trains over Cuesta Grade have stopped. Both the Coast Surfliner and the Coast Starlight stop at this station. But more on these routes in a later post.

Three hours after leaving Santa Cruz, I set up my camp/sketch chair across from the station and sketched an elevation view of SLO Station. It was a glorious morning!